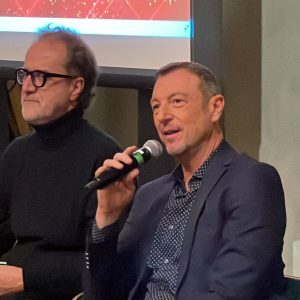 Music, comedy and entertainment with leading artists on stage. Presented by Amadeus. Perugia’s beautiful Piazza IV Novembre will be the setting for Rai 1’s traditional New Year’s Eve party whose special guests will include Piero Pelù, Francesco Renga, Nek, Dargen D’amico, Umberto Tozzi, Raf, Mr Rain, Modà, Iva Zanicchi, Noemi, Lda, Ricchi e Poveri, Matia Bazar, Rettore, Sandy Marton, Tracy Spencer, and others. Umbria and its regional capital, tourist destinations with a growing reputation, will also be among the stars of the evening. Emanuela Aureli, a native of Umbria, will lift the lid on the area’s most intriguing locations. The programme will be produced thanks to an agreement signed between the Region of the Umbria and the Municipality of Perugia with Rai Com.